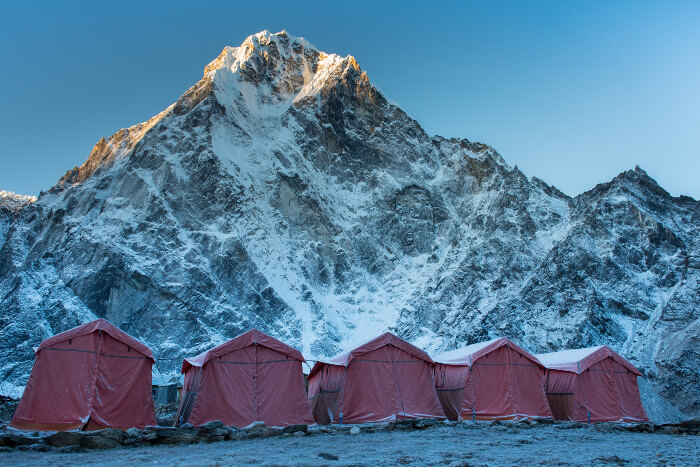 An icy wind was gusting off the Himalayan peaks, bounced off the freezing Khumbu River and attacked our faces. At 4,400 meter above sea level our group of 12 trekkers were slowly inching our way up a valley towards Everest Base Camp. One of our trekkers, Ntokozo, a cancer survivor, was not doing well. For the past 6 days, her oxygen levels were steadily dropping and she was showing signs of advanced altitude sickness. As we reached our lunch spot at the foot of a very steep pass, a tearful Ntokozo flopped onto a bench outside the teahouse and said “I can’t go on”.

Having spent 8 months preparing for this trek, and assigned to post some flags for cancer victims who have passed over the years, her decision was not to be taken lightly. As an ambassador for the Breast Health Foundation, Ntokozo had an important mission – to show that cancer can be beaten, and that it is possible to defy this terrible illness to lead a healthy active live. But her responsibilities did not come without a heavy price. What weighed her down were feelings of guilt and incessant questions of why she survived when so many others perished. Her aim to do the trek in memory for those who have died, and set an example for other women struggling with cancer, was about to be crushed.

A quick team regroup was called and we decided to evacuate Ntokozo by helicopter to a hospital in Kathmandu. As I waited with her we spoke about goals, not reaching them, not finishing what one set out to do, and how to deal with unfinished business. Seven days later I caught up with a recovered Ntokozo in Kathmandu. “I have something important to tell you,” she said. Over a cup of tea she told me of an amazing development. “I almost died on that mountain, and as I was recovering in hospital, I came to understand what it was like to die. Because I survived I can now stand up and fight for those who have passed on.” This was an amazing account of overcoming severe physical exhaustion, changing attitudes and saying yes to life.

Ntokozo is one of the stories you will hear in the documentary “One Step at a Time” that will be flighted on Discovery TLC Channel 135 tomorrow – Monday 30 October at 20:55 with repeats on Tuesday 31 October at 15:25 and Wednesday 1 November at 09:05.

Check out when our next Everest Base Camp trip is planned